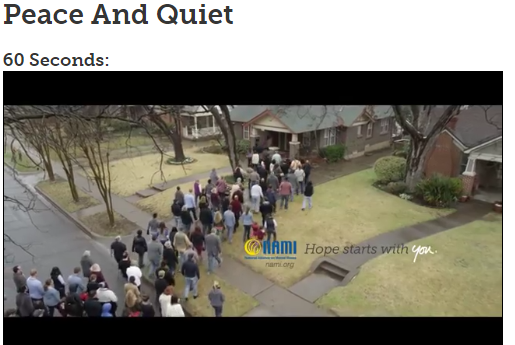 “Hope Starts with You” Campaign

Unveiled at NAMI’s 36th annual convention, July 6-9, the two PSAs featured in the campaign emphasize the difference that individuals can make in helping the 1 in 5 Americans who live with mental illness in any given year.

The first PSA, titled “A Brighter Day“, available in 60, 30 and 15 second spots, shows a man sitting sadly, alone on a park bench. One person, then another and then a crowd of people approach him, extending their hands—causing him to rise.

“When depression meets hope, everything can change,” says the voiceover. “Give someone who struggles the help they desperately need.”

The second spot, titled “Peace and Quiet“, available in 60 and 30 second spots, shows a young woman crying and hearing voices during an episode of schizophrenia. Her mother enters the room, followed by many other people, moving to comfort her, as the voiceover delivers a similar tag line.

“Every time a person gives time, energy or support or shares a personal story about a mental condition, there is a ripple effect that we like to call The NAMI Effect,” said NAMI Communications Director Katrina Gay.

“Everyone can make a difference in the lives of others.”

“Hope starts with everyone,” she declared.

“Be part of the NAMI Effect.”

The Dallas advertising agency 31,000 Feet donated services for creating and producing the PSAs, which were filmed in March 2015. About 100 NAMI volunteers participated in the making of “A Brighter Day,” which was filmed on a rainy, but still exuberant day. NAMI has posted a six minute “behind the scenes”  video of the making of “A Brighter Day” on its PSA website page.

NAMI is the nation’s largest grassroots mental health organization dedicated to improving the lives of individuals and families affected by mental illness.