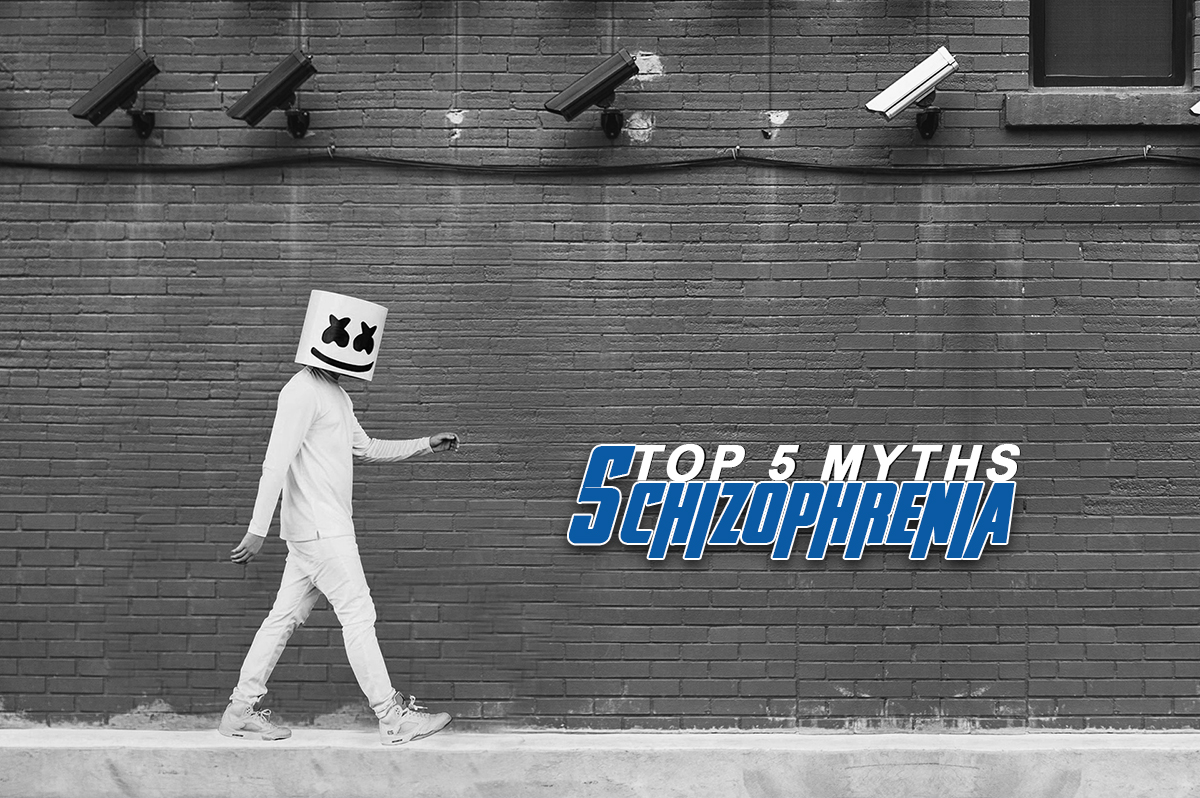 There are many myths about people with schizophrenia.  Our Top 5 Schizophrenia Myths sheds light on a mental health subject we all need to be aware of!

#1 – People with Schizophrenia are Violent The reality is, that this disease will never fundamentally change who the person really is underneath it all. Some people in general can behave violently, while others will never harm a fly. The same principle applies to those with Schizophrenia. If they were a peaceful person before being diagnosed with the disease, they will most likely continue to be peaceful while suffering from the disease – and vise versa.  Although the disease can be torture for those who suffer from it, the vast majority are non-violent people.  Labeling all of those who suffer from this horrible disease as being violent is simply not true.  The truth is that the majority of individuals who commit violent acts are more likely to have never been diagnosed with the disease, but more-so linked to drug and/or alcohol use and prior violent behavior.

#2 – Schizophrenics are Not Intelligent Aside from the movie, “A Beautiful Mind”, the general public may know very little about the disease itself. This one particular film portrays its main character with the disease as a genius.  For those who know those that suffer from the disease, simple everyday tasks, or “ADLs” (Activities of daily living) can be very challenging for them. Low functioning Schizophrenics can be perceived as having a very low intellect.  It is a common misconception to believe that just because one is severely mentally ill, that they are not intelligent.  The disease has no bearing on intelligence, and in many ways makes them stronger than the average person because of how they have to cope with everyday life.  Those who have overcome these extreme challenges and learn to live an everyday life are nothing short of extraordinary.

#3 – Those with Schizophrenia have multiple personalities Everyone can remember the “Green Goblin” from the Marvel Spider-Man movies. In this movie it shows a depiction of a split personality that we all can imagine for an evil super-villain.  Schizophrenia and multiple personality disorder are two completely separate conditions. Although some mental conditions are very complex and unique to each person, it is actually even more rare to have both schizophrenia and split personality disorder at the same time.  For those that have no personal experience or education on the matter these 2 conditions can be easily confused.

#4 – If you have Schizophrenia you belong in a mental hospital Usually only those who have committed violent acts and have gone through the judicial system wind up in a facility that can be referred to as a “mental hospital”.  Although there is no known cure, there are treatment options that can be very successful for some candidates. Even for low functioning individuals with the disease, there would be no reason to institutionalize anyone unless the individual was extremely violent or simply could not function in an outside environment (pose a danger to themselves and/or others).  It is also a reality that treatment costs money, and that the majority of the homeless or those who have little money are likely to have some kind of untreated mental illness.  It is important to understand that there is no law forcing an individual to accept treatment.  This sometimes is the most frustrating part for family of those who suffer from the disease. The 2 known links to the disease are hereditary and trauma at birth. Although most cases of schizophrenia are somehow linked to a specific traumatic event (where symptoms start to show), referred to as a trigger, stress and attitude are most likely not the direct cause for anyone with this disease.  Even though stress and anxiety can raise risk factors for the disease – the 2 most prevalent “causes” are linked to genetics and those who have sustained neonatal brain trauma.  The overall chances for anyone to have this disease is very rare, where stress and anxiety are very common.

If you or someone you know is dealing with a mental health issue, please share this and our our free mental health services to them.  You can save a life!